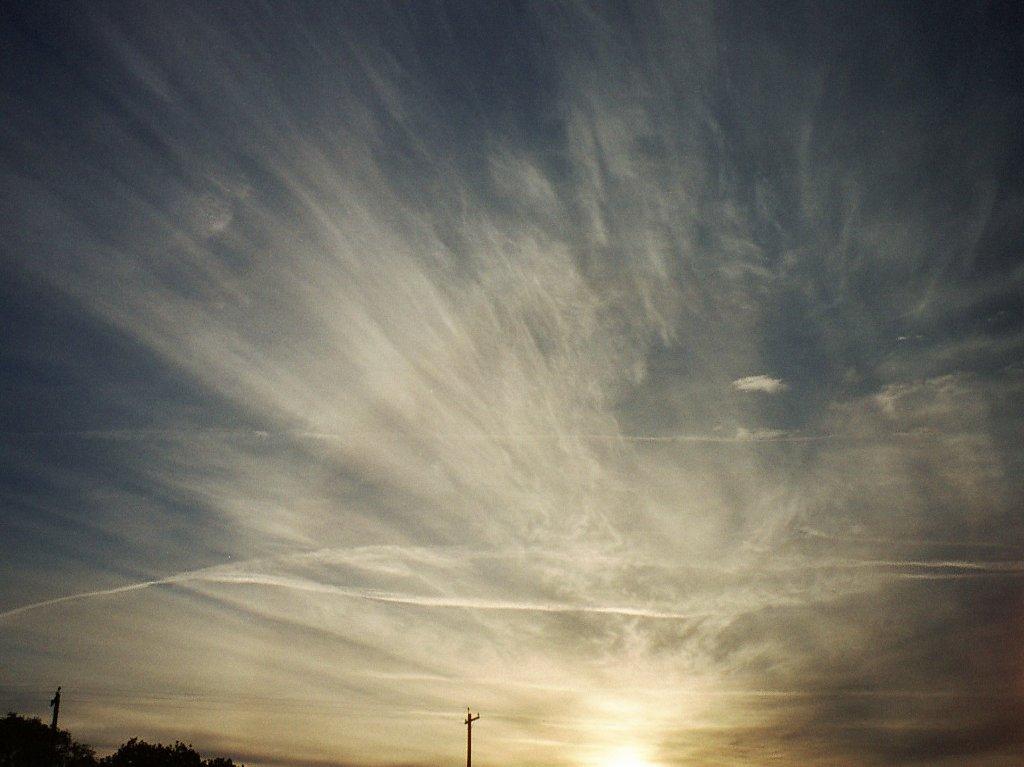 Welcome to the Geoengineering (Climate Remediation) Current Events Section of the ADC Website.

The United States House of Representatives Science & Technology Committee has agreed to work with the UK Parliament on Geoengineering Issues starting in 2009.  These formal agreements, UK Parliament hearings, U.S. House Committee Hearings in 2009-2010, final reports and other information are located in this section. (Under the current definition of Geoengineering or Climate Remediation Schemes (Solar Radiation Management): These schemes are only designed to "MASK" any warming trends.)

A second Geoengineering Section has additional information on the types and scope of geoengineering schemes, historical information, weather modification programs, water vapor and aviation, agriculture impacts, and other information.  If you click here and you will be automatically transferred to the Geoengineering (Climate Remediation) Schemes Section. 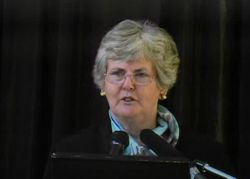 The following Power Point Presentation was Produced by Rosalind Peterson & Todd Blackmon for the above presentation on Geoengineering the Atmosphere - October 23, 2011:

16 2011 GEOENGINEERING Power Point Presentation How Do You Like Your Skies or Man Made by Rosalind Peterson.ppt

Allan Buckman's Power Point Presentation which was presented at the Geoengineering Seminar on October 23, 2011 is located below titled:  Man-Made Climate Change in the Skies 2011.

Geoengineering (or the new term, Climate Remediation officially coined on October 4, 2011, by the Bipartisan Policy Center which is a private congressional lobbying group), also has under its umbrella genetically modified trees, plants, seeds, crops, etc.  The intention is to drive a carbon tax which will fund many private corporations who will engage in a myriad of geoengineering schemes and make huge sums of money under government and other contracts or to fund under a U.S. government budget in 2012.

Since research, scientific knowledge experiments, and military actions are not covered under most international treaties and conventions...it opens the door for these experiments to be used around the world.  Solar Radiation Management is one such experiment that will only "mask" temperature or global warming...this is not a fix.  Once started it cannot be stopped as the warming it "masks" will then show up immediately and fast.  The water vapor, sulfur or aluminum oxides gases, used to make small particles in the atmosphere will need to be used continously...as the particles will fall back to Earth on a constant basis...polluting air, water, soils, causing acid rain and other problems.

In the audio below, from an AAAS Meeting in February 2010 (San Diego, CA), on a 2009 Royal Society Report on Geoengineering, are the following speakers:

The UK Parliament and the U.S. House of Representatives Science & Technology Committee Final Reports and Joint Cooperating Agreements are Located in This Section

Please note that the testimony in both UK and U.S. hearings was highly limited with testimony mostly from those promoting Geoengineering and Climate Remediation Schemes.  Almost the same cast of individuals testifed during all of these hearings.  In most cases few were asked to testify that would oppose or questions these geoengineering schemes.

In addition, testimony was not requested from marine biologists, agriculture, foresty, EPA (with regard to toxic chemicals being used - Water, Soil & Air Pollution) NASA, NOAA, solar power producers, and a whole host of scientists in other fields.  Thus, a full and complete discussion of the impacts was denied to those holding the hearings and the public. The potential for these geoeingeering schemes to have synergistic and cumulative effects is staggering. 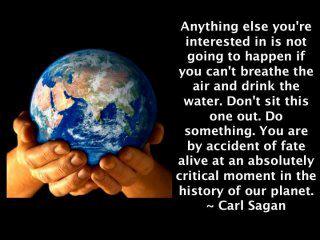 For more Information on the U.S. House Science & Technology Committee:

What Happens When We Artifically Reduce the Amount of Direct Sunlight Reaching the Earth?  Photosynthesis Poster

116A PHOTOSYNTHESIS POSTER What Happens When We Artificially Reduce the Amount of Direct Sunlight Reaching the Earth.pdf

The U.S. House of Representatives Science & Technology Committee has Held 3 Geoengineering Hearings.  One in 2009, and two in 2010.  They Issued a Final Report in 2010.  You will find this report and information about those hearings below:

116E 2011 State of California EPA Chemicals Known CA to Cause Cancer or Reproductive Toxicity May 20, 2011.pdf

Global Dimming is Happening Around the World due to a Wide Variety of Factors. Some of the dimmng comes from Aviation Impacts According to NASA and other university studies (See the 116J Section Below).  You can also find out more about this issue by going to the Sunlight Section of this Website:

It should be noted that Global Dimming and the reduction of Direct Sunlight Reaching the Earth has serious health consequences for all of us.  We invite you to visit the Vitamin D Section of this website to find out the consequences of our actions in reducing the amount of direct sunlight reaching the Earth.

In addition, please note the myriad of ongoing and proposed Geoengineering schemes listed under "Solar Radiation Management".  Most planned schemes will reduce the amount of direct sunlight from reaching the Earth.  The consequences are enormous for human health, tree and plant health (lack of photosynthesis), oceans, weather, climate, solar power production, and crop production.

Soil, Air & Water Pollution are direct impacts that will be felt for years...along with acid rain from atmospheric releases of salts, sulfur, aluminum, gases and particulates.  The ADC has tried to place as much information below as possible in order to spur public debate.

116I 2010 Geoengineering Can Not Please Everyone July 18, 2010 Nature News Negative Consequences.pdf

Water Vapor is a Greenhouse Gas - It should be noted that the influence of aviation has been largely ignored in the United States.  Also Geoengineering proponents do not want to discuss the man-made clouds produced by aviation and rocket sources. They clearly do not want you to know that water vapor is a greenhouse gas that is produced by aviation sources or that it is having a negative impact on our environment.

The most massive "Solar Radiation Management" Geoengineering Scheme has been underway in the United States and around the world since the late 1980s.  Photographs have documented the early days when deep blue sky days were common through today when Blue Skies are rare.

NASA research studies show that increasingly persistent jet contrails may turn into “man-made clouds” (or white haze), and are “…trapping warmth in the atmosphere and exacerbating global warming…Any change in global cloud cover may contribute to long-term changes in the Earth’s climate…” No current U.S. legislation addresses water vapor and aviation impacts on the global atmosphere.

If you "LOOK UP" you can observe what Solar Radiation Management looks like on an almost daily basis in many areas of the United States and in other countries.  The photograph below provides a visual of what one ongoing Solar Radiation Management Experiments look like.  What has happened to our deep blue skies?  Who has the right to reduce the amount of direct sunlight reaching the Earth - no one! 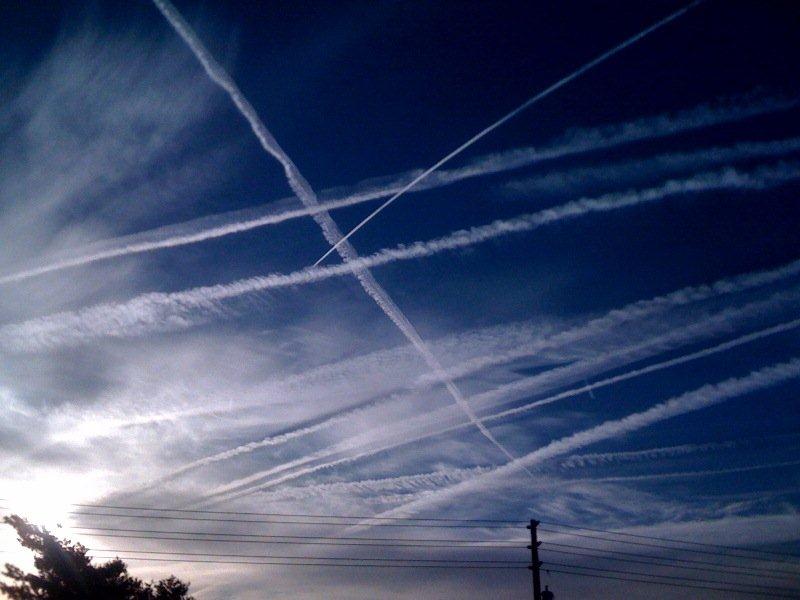 116V 2010 MIT Professor of Meteorology-IPCC Got it Wrong Aerosols Warm the Earth Not Cool It August 9, 2010 LabNews.co.uk.pdf

116Y 2009 ETC Group September 4, 2009 Geoengineering or Geopiracy by the The Royal Society.pdf

NASA JPL Presentation on Geoengineering & Climate Change February 14, 2013
Video Lecture Series California Institute of Technology - What type of thinking is going on now with regard to Geoengineering?

We have to keep this option on the table. We don't understand the system well enough to engineer it.  The side-effects are unknown and may be worse than the original problem...and he admits doesn't solve the whole problem.  Solar Radiation Management is discussed.  (Interesting short clip of AP Interview.)  We don't know enough about the atmospheric heat transfer system to predict responses.

He says that if we get desperate enough, we may have to use it.  (Associated with Woods Hole Research Center)

Guest: Pat Mooney, executive director of the ETC Group, a Canadian-based organization that addresses the impact of new technologies on vulnerable communities. He is the author of several books on the politics of biotechnology and biodiversity. In 1985, he received the Right Livelihood Award in the Swedish Parliament. Supporters of geoengineering have proposed radical ways to alter the planet to decrease the level of greenhouse gas emissions.

Pat Mooney on the Dangers of Geoengineering and Manipulating the Planet to Combat Climate Change - Proposals include creating artificial volcanoes to pollute the atmosphere with sulfur particles, fertilizing the oceans and placing sun-deflecting aluminum foil in the sky. But opposition is growing to geoengineering. Here at the World Peoples’ Summit on Climate Change in Bolivia, the ETC Group is launching an international campaign against geoengineering experiments. We speak with the group’s founder, Pat Mooney, a Right Livelihood Award winner.

Supporters of geoengineering have proposed radical ways to alter the planet to decrease the level of greenhouse gas emissions. Proposals include creating artificial volcanoes to pollute the atmosphere with sulfur particles, fertilizing the oceans and placing sun-deflecting aluminum foil in the sky. But opposition is growing to geoengineering.

Intentionally Managing Our Climate - Mitigation through Climate Remediation or Geoengineering
Recommendation of this Committee is that the United States should start doing Geoengineering Research
Admitted that other countries are already doing research and conducting experiments - Russia, India, Germany, England

They want U.S. to take the lead and initiate a public policy to sell Geoengineering to public.  Controversial
Issue with Climate Fears Driving these Schemes Climate Remediation = Geoengineering  (They did not want to label as Geoengineering - Terminology Disagreement)

U.S. Approach to Research Sets Example for other countries - Collaborate International Research - All countries accept and abide by these "norm" recommendations - not at the level of diplomats but scientists. (Skip Diplomatic Channels)

He is one of the pre-eminent geo-engineers striving to find new ways to combat global warming, by altering the way the sea, the clouds and the atmosphere work.  This isn't a replacement, he says, for the political drive to reduce emissions. Tim Franks spoke to him about whether geo-engineering is a cost-effective, emergency stop-gap, before the effects of climate change become irreversible - or a dangerous leap into the unknown? (You can watch the full interview on BBC World News on Monday 14 November at 0430, 0930, 1530 and 2130 GMT and on BBC News Channel on Monday, 14th November 2011 at 0430 GMT and on Tuesday, 15th November 2011 at 0030 GMT.) 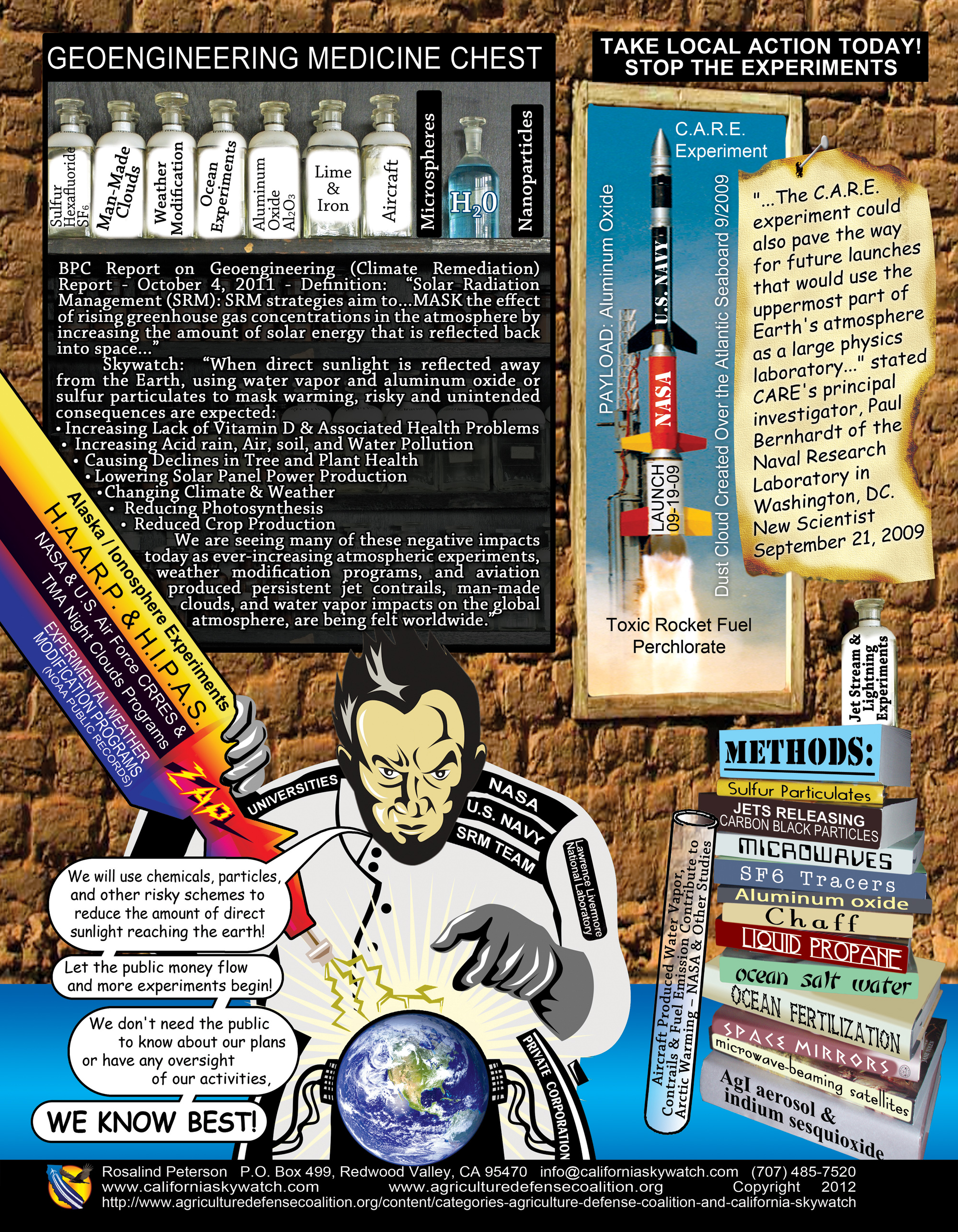 Click on the poster to see it in full size.

Naturalist Sir David Attenborough says people living in the Arctic have "no doubts" that climate change is happening. Speaking to the Andrew Marr Show about his new series Frozen Planet the veteran wildlife filmmaker says that part of the problem of global warming is the increasing world population saying "There are three times as many people on Earth than when I started making television programmes."

3 2012 Factory Food-First Test Tube Hamburgers Will be Ready October 2012 According to BBC News from the AAAS February 20, 2012.pdf

"...Michael MacCracken has been chief scientist for climate change programs with the Climate Institute in Washington, D.C., since October 2002. His current research interests include human-induced climate change and consequent impacts, the potential for climate engineering and the beneficial effects of limiting emissions of non-CO2 greenhouse gases. From 1968 to 1993, he led climate modeling studies at the Lawrence Livermore National Laboratory in California that were designed to evaluate the effects on climate of greenhouse gas emissions, volcanic aerosols and nuclear war. From 1993 to 2002 he served as senior global change scientist for the interagency Office of the U.S. Global Change Research Program, where he served as the first executive director and then as executive director of the coordination office for the U.S. National Assessment of the Potential Consequences of Climate Change. During this time he also coordinated preparation of the official U.S. Government reviews of the periodic assessments of the Intergovernmental Panel on Climate Change.

Since 2002, he has served as an integration team member for the Arctic Climate Impact Assessment, president of the International Association of Meteorology and Atmospheric Sciences and co-lead author of the report Confronting Climate Change: Avoiding the Unmanageable and Managing the Unavoidable, prepared for the United Nations Commission on Sustainable Development. He was most recently chair of the Scientific Organizing Committee for the International Conference on Climate Intervention Technologies: Minimizing the Potential Risk of Research to Counter-balance Climate Change and Its Impacts. MacCracken has an undergraduate degree in engineering from Princeton University and a PhD in applied science from the University of California, Davis..."