Citizens Oversight of Navy Ocean Disposal Operations (CONDO) came together in 2010 as an information-sharing association of the Agriculture Defense Coalition, Citizens Opposed to Weaponizing the Oregon Coast, and coastal residents of California, Oregon, Washington, Alaska, and Idaho. Their common concern was the toxic legacy accumulating from the U.S. Navy's ever-expanding weapons testing and training in coastal waters from California to Alaska.

Staff writer for Planet Waves, and contributor to CONDO

Four years ago, the U.S. Navy issued its final NWTRC Environmental Impact Statement for weapons testing and training along and offshore of the entire Pacific Northwest from the Canadian border, to all of Washington and Oregon, and northern California, including parts of Idaho. The final EIS/OEIS included three volumes, containing thousands of pages.  Volume III was for public comments, well-prepared, substantive comments, a few answered by dismissive and insulting Navy responses, and most answered simply, "Duly noted."

http://www.agriculturedefensecoalition.org/sites/default/files/file/us_n..., other volumes are listed below.

How duly the Navy noted all those comments is sorely evident in the Navy's NWTt Draft 2014 Environmental Impact Statement containing more of the same bombing, gunnery, explosives, and sonar testing and training in the same area, now extended all the way to Alaska (SEE LINK BELOW). For example, many 2010 commenters pointed out the Navy's egregious refusal to avoid disturbing marine reserves along the Oregon and California coasts. The 2014 EIS repeats the same insult to all the care and planning devoted to marine reserves, bluntly asserting its right to bomb, shoot, explode, and zap with sonar and electromagnetic impulses every living thing in these sanctuaries.

So much for the Navy's commitment to environmental stewardship!

Instead of remedying that falsity, the Navy's 2014 NWTT EIS incorporates it as previously approved -- without saying, of course, who approved it! For some specific issues raised by 2010 commenters, such as the question of the cumulative effects of some 60 years of depleted uranium use in the “No Action” alternative, the Navy has simply omitted all mention of depleted uranium in its 2014 EIS (instead of repeating its previous 2010 reliance on thoroughly discredited, unpublished, non-peer-reviewed research [e.g., pp. G-288-G-289]).

In 2010, blatant notice and comment failures were repeatedly answered by simply declaring with no substantiation that the Navy complied with NEPA, at the same time often citing “public notification budget” considerations for notification failures (see e.g., pp. G-94 (twice), G-95, G-96, G-127, G-176, G-184, G-200, G-201, G-228, G-229, G-236, G-247, G-305). The Navy compounded its notice failures by repeating the same fiasco with the final EIS, hiding notice in an EPA Federal Register notice, sending only a single copy for the entire state of Oregon to a library hundreds of miles from many affected coastal communities, and having its web site crash or be inaccessible during the comment period.

Repeating ad infinitum that the Navy complied with NEPA does not make it so, and with typical obfuscation, the Navy has repeated the same failures in 2014, sending out its draft EIS on compact disks with no search function, failing to put even a rudimentary index in its hard copy, sending hard copies only to a few libraries remote from most of the affected coastlines, refusing to send hard copies to folks without computers on grounds it is too expensive.

The Navy ignored or dismissed many 2010 commenters' substantive issues, such as the DOI recommendation that all alternatives include measures for retrieval of debris and equipment,and also include analysis of the effects of toxics released into the water by uncollected debris, to which the Navy responded by saying it would be “impractical, if not impossible to collect the thousands of expended items...,” and that requiring collection of them would therefore be unreasonable. (G-38) To the surprise of no one, the 2014 NWTt draft EIS does not address this issue.

In response to numerous comments about hazardous materials, the Navy added some scattered information to the final 2010 EIS about toxicity and Navy waste disposal practices, including its practice of throwing heavy metals, solvents, cyanide, and other toxics overboard (see, e.g., p.3.3-17) . Predictably, the Navy concluded upon no basis whatsoever that there would be no significant impact from such practices, and nowhere mentioned the cumulative impact of 60 years of such wanton dumping encompassed by the “No Action” alternative. Absent any official oversight of Navy disposal practices, citizen oversight, via CONDO, is imperative.

Having approved of its own legerdemain back in 2010, the Navy doesn't even include a hazardous materials disposal section in its 2014 NWTT draft EIS, and has so far refused to provide such information, or information about explosive weapons disposal, under the Freedom of Information Act.

The above are just a few of the shortcomings (a kinder, gentler way to say total lies and failures) repeated and multiplied in the Navy's 2014 NWTT draft EIS, which is  poorly organized, badly written, and replete with self-referrals and disinformation. It couldn't be worse if they tried.

Thanks to the efforts of county supervisors and commissioners in Oregon and California, as well as some outraged citizens, the Navy has extended the comment period for its current travesty to April 15, 2014. Take some time to look at it and comment, and above all, to raise the issues with legislators and the media.  End

3)  The U.S. Navy applied for two permits to “take” marine mammals in the NWTT Range Complex which includes Northern California, Oregon, Washington, Idaho & California.  The U.S. Navy applications to NOAA was issued on December 18, 2014, one month before the Navy NWTT Draft EIS/OEIS was available for public comment on January 18, 2014.

A.  The public comment period issued by NOAA on these two applications (300 pages in length), closed on February 28, 2014, and did not give time for public comment due to the length of the Navy applications to NOAA and the Navy Draft EIS (Approximately 2,000 Pages in Length).

B.  We formally request that the NOAA deadline for Public Comment be reopened and that the U.S. Navy Draft EIS/OEIS public comment period be extended for 30 to 60 days.  Both the Navy Applications to NOAA and the NWTT Draft EIS are based on the information in both documents.  Thus, the public comment periods should be open at the same time to give the public time to comment under the National Environmental Policy Act (NEPA).

Public Comment Was Closed on February 28, 2014.  Please join us in working to reopen this public comment period.

U.S. NAVY MITIGATION MEASURES TO PROTECT MARINE MAMMALS EFFECTIVE ONLY 9% OF THE TIME:

271A 12 2012 U.S. NAVY CARTOON No Visual Sightings Bombs Away Sonarize our Oceans.pdf

U.S. Navy Mitigation Measures to Protect Marine Mammals Effective Only 9% of the Time:

271R 11 2010 Lasers Could Trigger Downpours on Demand May 4 2010 Physicists Already Tested This Method.pdf

271R 14 2007 Operation of a Free Electron Laser from the Extreme Ultraviolet to the Water Window EUV0 FEL Nature Photonics 2007.pdf

271S 10 2011 Whales+Seals Human Noise Might Cause The Bends if Whales or Seals Surface too Rapidly Study DEC 21 2011 guardian.co.uk.pdf

271S 22 1992 The Emergence of Low Frequency Active Acoustics as a Critical Antisubmarine Warfare Technology by Tyler.pdf

*** The U.S. Navy Map below outlines the areas in which the U.S. Navy is now conducting warfare testing in the Pacific, Atlantic & Gulf of Mexico.  There are more than twelve U.S. Navy coastal operating ranges in these areas.  (The Navy Mariana Islands Range Complex in the Pacific is included in this list.)  And each range complex, whether large or small, has permits from NOAA/National Marine Fisheries Service to "take" or harm marine mammals.
Click here for a full size poster! (9.42MB) 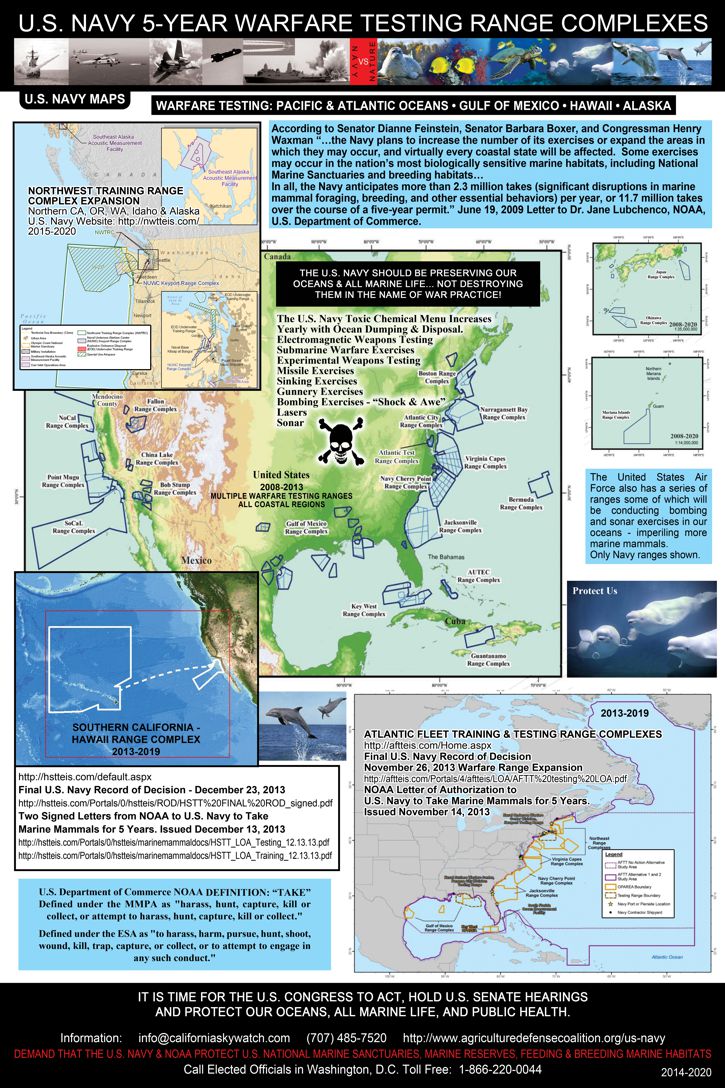