The BONNEFIRE Coalition was founded by Bonnie Hoag, a gentle but fiery poet, activist and committed ecologist who lives in eastern New York State. 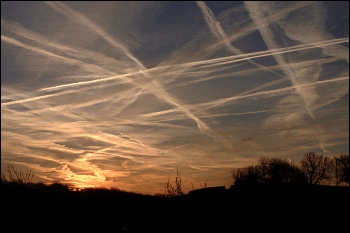 Bonnie has been tackling the tough issues since she was a teen in the early 1960s, including the Civil Rights Movement, the Vietnam War, loss of wild habitat, responsible hunting, mass-burn incineration (in 1990, she ran for town supervisor on this issue), simple living, nuclear energy/waste/weapons, depleted uranium, the wars in Iraq, and Afghanistan...now Pakistan – and now the desecration of the sky.

With a friend, Bonnie rode her bicycle across the U.S. in 1975. She has traveled the Earth extensively – often with a backpack. For ten years she was the producer and host of Necessary Radio on WRPI, Troy, NY. She has founded two nonprofit environmental organizations.

"When I found my skies looking like the picture to the right on this page, I knew that I had to protect the Earth and our once clear blue skies from the persistent jet contrails that turn into man-made clouds, white haze that exacerbate climate change and global warming.  According to NASA studies, these man-made clouds trap warmth in the atmosphere, contribute to long-term changes in Earth's climate and have negative effects on our natural resources.

THE BONNEFIRE COALITION was formed to end the PJC Program, a massive geoengineering project, which broad implications for all life on Earth.  NASA calls them Persistent Jet Contrails (PJCs).  PJCs are those expanding jets trails - often appearing in grids, Xs and parallel lines - which are witnessed and recorded daily in the United States and around the world.  As PJCs expand they combine to veil the sky and reduce the amount of direct sunlight reaching the Earth.

The U.S. Department of Commerce, NASA department, agrees with the Bonnefire Coalition that PJCs are contributing to global warming and reducing the amount of direct sunlight reaching the Earth.  While we have been busy educating the public and working to stop PJC geoengineering programs, another geoengineering acronym has sprouted in the laboratories of the global scientific community:  Solar Radiation Management (SRM), which is the focus of this “smoke signal”.  (See the Kindling Section.)

Here, at the outset, I submit that my first remedy to the sickened condition of Earth is simply for our species to wake from our long coma!  We are trained and educated away from common sense and taking personal responsibility.  And we are starved for the kind of nourishment which simplicity and generosity might provide.  Simplicity has been gobbled up by excesses, endless fear mongering, and false advertising.

"I hear, internally, that I am obligated now only to be a calm, conscious, witness to the present roiling and the unfolding intensity of planet Earth, but as a long-time activist I am also compelled to help recover the sanctity of Breath." – Bonnie Hoag